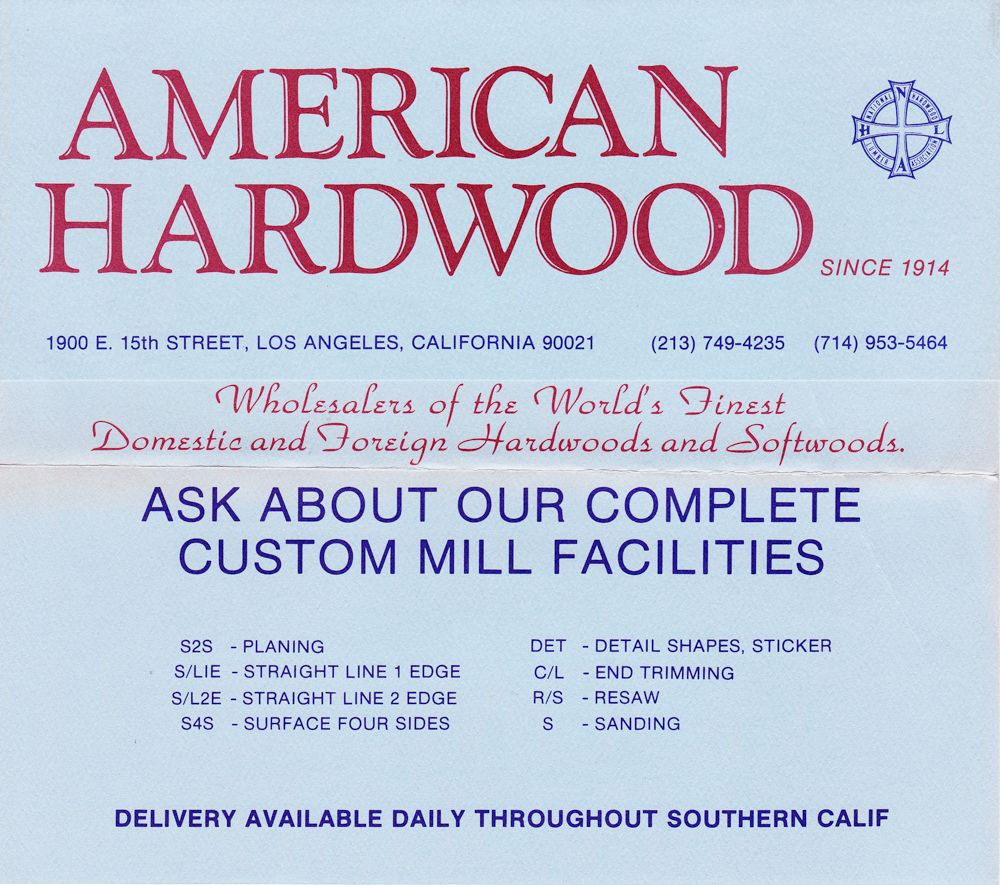 The company was founded in 1914 by my great grandfather EE Taenzer who moved to Los Angeles a year earlier after a successful hardwood lumber career in Tennessee where he co founded the Memphis Hardwood Lumbermans Club and the National Hardwood Lumber Association.

EE decided to move west after another Mississippi River flood wiped out sawmills and log inventories. The company was shipping more and more lumber west in addition to the export business to Europe. EE and my grandfather CR went west to survey the market. They traveled from San Diego to Seattle and decided to relocate to Los Angeles where the weather was the most favorable , a budding seaport in Long Beach was developing and a rapidly growing population meant growth. Why American Hardwood? My grandfather said there were two reasons, one, it was a patriotic name and the other, it would appear first in the telephone book.

EE passed away in 1929 (a month before the stock market crashed and the depression); CR took over and ran the company until he passed away in 1989. In addition to CR, his younger brother Milton assisted in managing the company. Eventually CR hired his son in law, my father, Russ Bond and Milton hired his son in law, Bill Moore. Yes, a little nepotism began because neither CR nor Milton had sons. Later two more son in laws were hired. Unfortunately, my father became ill and was replaced, so Bill Moore took over from my grandfather to manage the company until my brother Robert succeeded him. After CR passed in 1987, the company was sold in 1989. My brother was retained by the new owner but left after two years and unfortunately, the company went bankrupt a few years later due to poor management. My grandfather and his father alike are still rolling over in the graves! 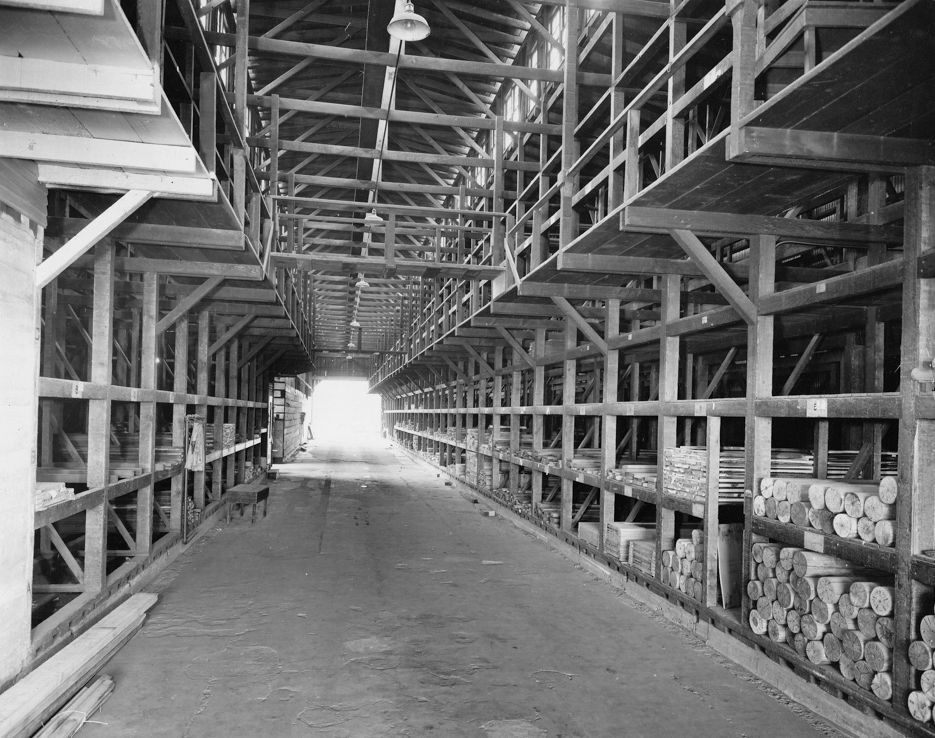 AHCO was a broker/distribution/millwork company. The company inventoried domestic and imported hardwoods: red and white oak, maple, poplar, cherry, walnut, ash, soft maple, hickory, cypress, elm, and basswood from Appalachia and the south and ramin, mahogany, teak, apitong from southeast Asia among others. 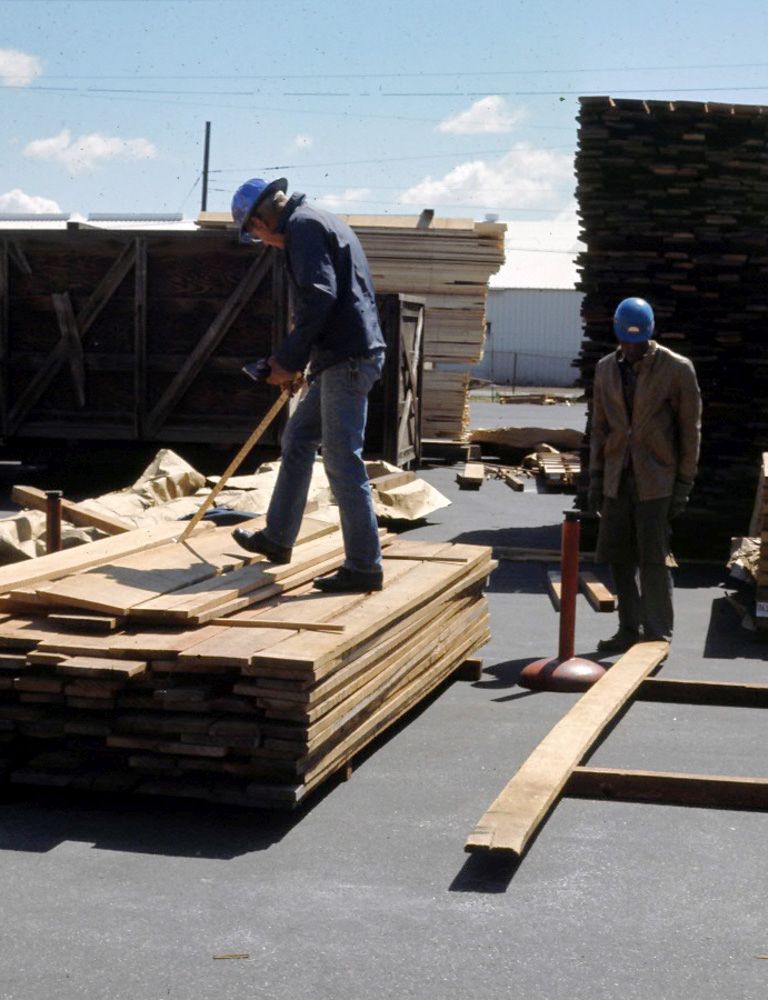 Most of the time the lumber arrived kiln dried, ready for resale but on some occasions, the lumber arrived "green" and needed to be seasoned for months on sticks to allow the boards to season or acclimatize. The lumber shipped directly to our yard via our own railroad spur. Over time, new customers developed who wanted the lumber reworked. In order to accomplish these requirements a planing mill was established with planners, molders, straight line ripsaws, cutoff saws and resaws to process the wood. Forklifts moved units of lumber around the yard and delivery trucks delivered orders to customers.

Yard employees included ordermen, inspector/graders and helpers, men who stacked lumber on and off sticks (this lumber was drying for final use) and forklift drivers.  Mill employees fed and tailed away boards from each machine and one man who made knives for the molders while another "setup" the head of the moulder to shape complex moldings.

In 1956, there was a total destruction fire and the warehouse, offices, equipment and inventory were lost in what the LA Fire Department chief said was the largest fire in the history of Los Angeles. It was a catastrophic to say the least! While the hardwood community rallied around the company to help AHCO get back on its feet, it took quite a while to rebuild the sheds, sort out the unfilled orders, restock the warehouse and cope with the lost records. The cause of the fire was traced to a watchman who had plugged equipment from his camper into an outlet and caused a short in the electrical system which sparked the fire. Sadly, before calling the fire department, the watchmans first priority was to save his camper 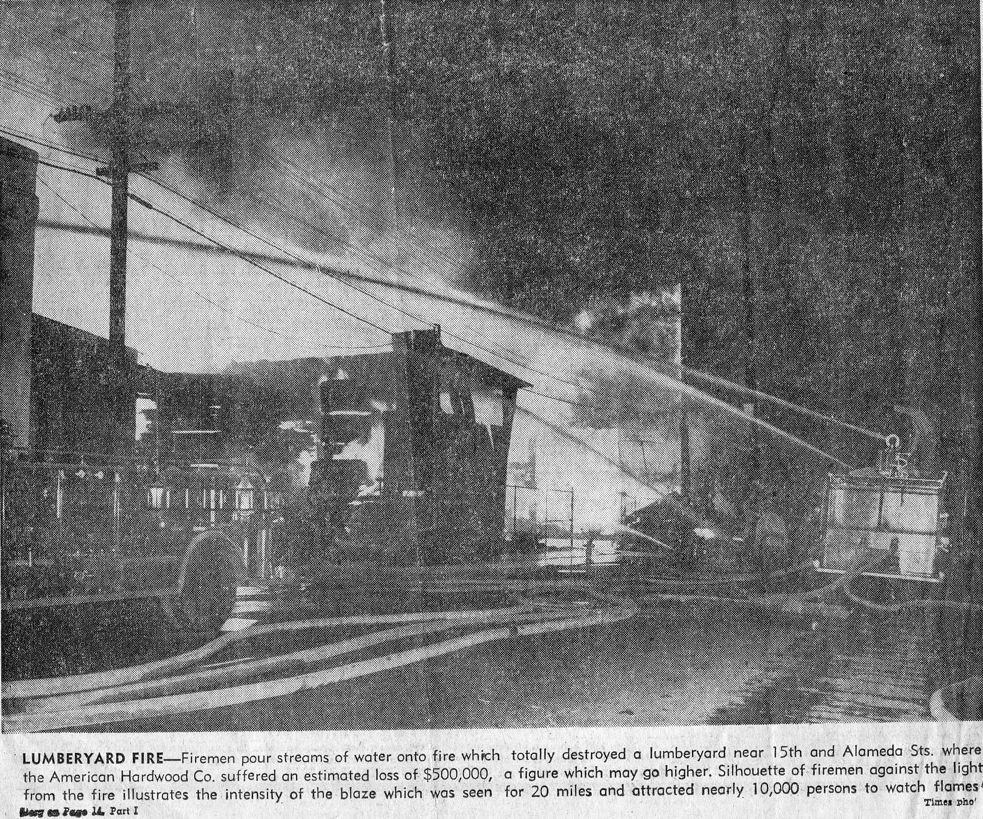 As soon as the sawmill shipped the lumber, they would advise us the railcar ID and mail an invoice with the manifest. We would kept track of the movement the car and were ready for it when it hit our spur. First thing, the car door was opened and inspected to make sure that the lumber inside was intact and was our order. Some cars would be loaded with each unit securely strapped so that they could be unloaded with a forklift but others were loaded board by board which meant that we would have to hire an unloading crew from the Union Hall, usually two men who would unload the car, theyd stack it for the forklift to take to a grader for counting and grading. A typical car would have 50,000 board feet with various thicknesses (4/4 5/4 6/4 8/4 10/4 12/4 16/4), species (red oak, white oak, poplar, ash, walnut, cherry, sycamore, cypress, birch, beech, maple) and grades (#2 common, #1 common, FAS).  It would be the responsibility of the grader to use his official NHLA grading stick to measure and count each piece keeping track using a NHLA approved tally form and his knowledge of the grading rules to verify the grade of each board. 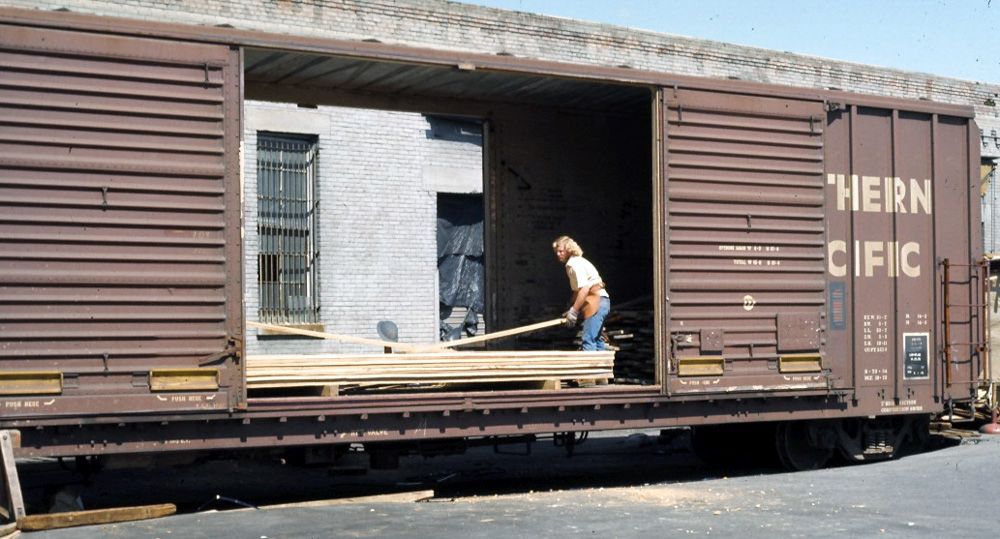 On some occasions there might be an order for an amount of lumber that the greater could fill while counting the incoming inventory. Not only did the grader keep track of each board, he would make separations for 10 and wider, clear narrow strips, 8 to 10 foot, 12 to 14, or all 16 foot and clear shorts. Each of these specifications were creations of our own and did not conform to NHLA grading rules.

After a carload was tallied and inspected, the tallies would be totaled to determine whether the order was properly received. . our tally and grading results rarely agreed with the mills but hardwood lumber counting and grading is subjective but most times, the mill and the company came to an agreement to finalize the order. The inventory tallies were kept in a box in the office. Each unit corresponding to a tally. When orders were sent to the yard, tallies were attached for the order man to adjust after an amount was used to fill the order. The tally would return to the box after recalculating.

In the 1980s, container delivery became more popular, the company didnt need to order 50,000 BF but 12,000 which helped with cash flow and inventory management. Each container was unitized so it was easy to unload. Each November a crew from the office would physically count every unit in the warehouse to arrive at the year end inventory. 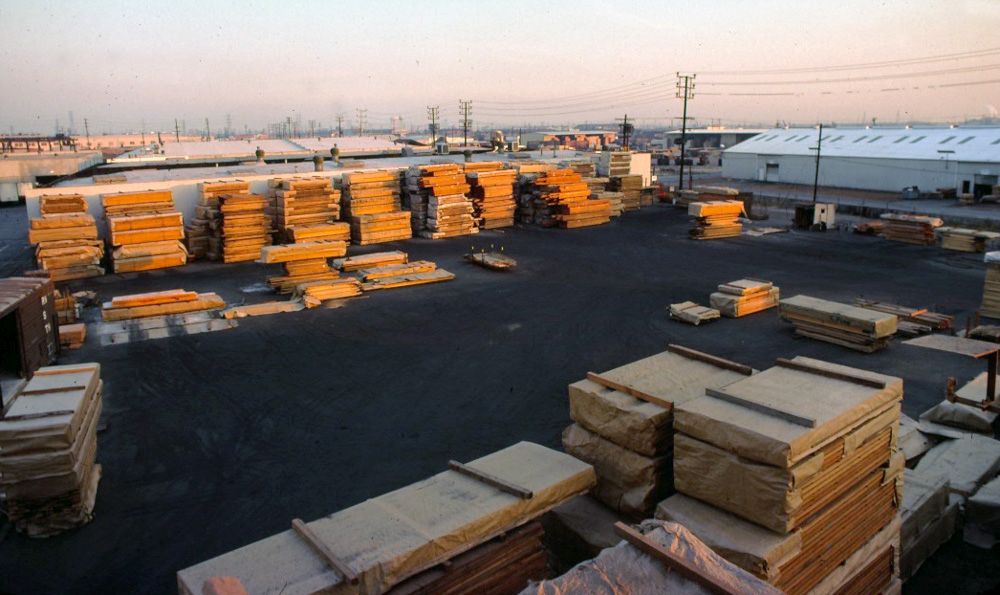 The yard foreman was a very complex and important job. I held that position for 5 years and was the first to create the job of Mill Foreman who reported directly to me. That gentleman, Bill Gruber became a lifelong friend. The job entailed managing the personnel of both the yard and mill, overseeing the incoming and outgoing inventory, assigning order filling tasks, grading tasks, forklift work and truck loading work, maintenance of equipment, adjusting priorities of orders as customers needs changed. The foreman assigned orders to order men with instructions, to locate units of lumber to be used to fill orders, to direct laborers in their general stacking functions see to it that orders were loaded on trucks for delivery, make sure the dust collection system didnt back up, make sure that the rippings and cut offs from the mill were properly thrown away which had to be hauled to the dump. There were a lot of machines that needed to be maintained. Forklifts and trucks had to be regularly checked for hydraulic systems tire use engine maintenance, millwork equipment had to be properly lubricated and precision steel inventory for making knives and saw blades needed to be monitored and sharpened. And we had an underground 2000 gallon gasoline storage tank for use by forklift and delivery trucks. The manager of transportation (shipping clerk was responsible for making sure the tank didnt fall below 50% capacity). There was a lot of record keeping.

Everything started with a customers order which most of the time came from the salesmen in the field. It was a very competitive industry with many similar distribution yards located throughout Southern California. Salesmen in the field called on customers from San Luis Obispo to San Diego to San Bernadino. Inquiries came from institutional customers RFQs (request for quote), regular customer telephone and salesmen submissions and customers visiting the yard.  The sales desk personnel would receive inquiries and work up quotes, many times after consulting with the yard foreman and Bill Moore. The back office handled bookkeeping.

Over the years, I worked with so many dedicated employees, I apologize to those whos names Ive forgotten:

A great tradition in the history of the hardwood lumber industry. 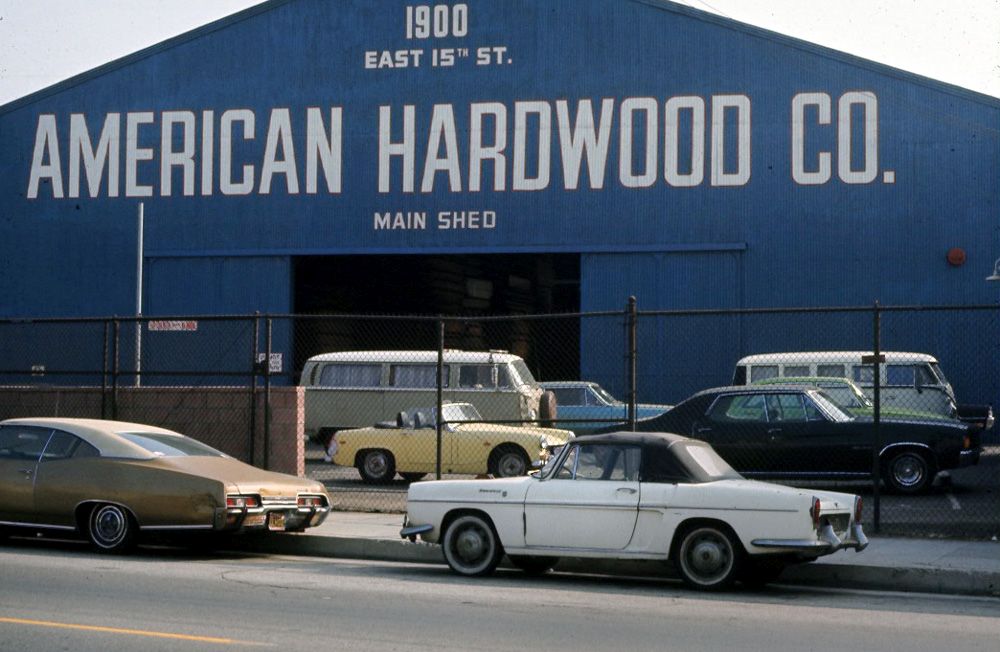 No downloading, reproduction, or use without the written permission of Craig B. Kincaid.
contact Craig by email :  ck at craigkincaid.com
copy and all rights reserved 2005 - - www.craigkincaid.com